Blog » Are You Afraid to Innovate?

Are You Afraid to Innovate? 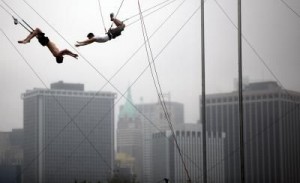 Recently I worked with a very successful company that brought me in to shake things up and show them how to stoke the new product pipeline. In other words, help them innovate.

I led strategy sessions with the senior management team. I gave company-wide presentations on the importance of innovation. I coached middle managers on how to encourage new ideas and risk-taking. Yet, after months of hard work, the innovation train had not even left the station, much less reached its destination.

Management seemed to buy into the importance of innovation. And they expressed an honest desire to make the company more innovative. But in the end, they just couldn’t get over the hump and take the first step in the right direction. It reminded me of standing at the top of a 10-meter diving platform, staring at the water 30 feet below. They wanted to jump off, but fear kept holding them back.

Most companies today understand the need to innovate, but many struggle to do so. Not because they lack the talent or resources or motivation, but because they’re afraid. And the more successful the company, the greater the sense of fear. What are they afraid of? Usually it’s losing everything that made them successful in the first place.

One of the real shortcomings of the human brain, at least in the business world, is the tendency to hold on to the past. To believe that what made us successful up to this point will continue to make us successful in the future. This may have been true when the world moved at a much slower pace. But in today’s hyper-paced business environment, it makes about as much sense as buying a lottery ticket to finance retirement.

At the same time, humans are more driven to avoid pain than to seek reward. This is probably a holdover from our caveman days, when the avoidance of predators and other threats was essential for survival. Regardless of where it came from, it’s scary to think about giving up what has made you successful for something that may or may not work. It’s one thing to let go of the first trapeze when you know the second one will arrive at just the right time. But in today’s environment, we have no certainty that the second trapeze will arrive, or that it will even be a trapeze.

If fear of letting go seems to be holding back your company’s attempts to innovate, try the following:

Identify your fears
In business, as in real life, most of our fears are unfounded. Start by asking, “What am I most afraid of?” Follow that up with questions like: “Are my fears real or imagined? Do I have hard data to support them, or are they based on beliefs and assumptions that may no longer be true?”

Ask “what if….?”
To help neutralize your fears, or at least make them more manageable, ask a series of “what if…?” questions. For example: “What if those things I’m afraid of don’t happen? What if I’m willing to build in some safety nets to minimize the risks? What if I can move forward without risking everything?”

Expose your thinking
Often people fear new ideas because they don’t see the world the same way you do. Exposing your thinking can help. When presenting a new idea or proposal, lay out all the data behind it and show how it supports your proposed solution. The idea isn’t to force people to see the world the same way you do, but to get them to understand why you see it that way. Once people understand your perspective, they become more open to expanding their own point of view and considering new ideas.

Address the threat rather than the opportunity
To overcome people’s ingrained fears, it may help to frame your idea or proposal as a solution to an existing threat rather than a new business opportunity. Focus on what is known about your idea rather than what is new and unproven. In many cases, innovation comes from putting together different pieces of what already exists in new and different ways (the iPod). Explaining how some of the components of your idea have already been tested and proven in the marketplace can help to overcome resistance borne of fear.

We all have fears, many of them valid. By becoming aware of them and working through them, we can open the door to meaningful innovation and the rewards that come with it.

Call to action: Identify a fear that prevents you from innovating. Then ask “what if….?”

More Medicine for Your Complexity Complex

The Secret Sauce For Successful Implementation

How to Develop 5 Critical Thinking Types